I've never been quite sure why in either case. But this story from Flying magazine, way back in 1974, suggests the answer for the Knocker. 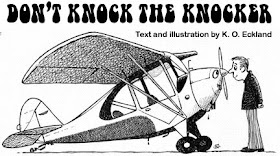 I sip my coffee and wave off the autograph-seekers. Through the restaurant window I keep an eye on my plane and the curious masses that swarm around it. It always attracts the masses, this great beast from out of the past.

The throbbing of the idling engine, burping little wisps of iridescent blue smoke, travels through the ground up to the lunch counter and leaves little rings in my coffee. I always leave the engine idling when I'm having my morning coffee. It pleases the masses so.

The morning sun glints on the golden wings the same way it did so many years ago when we screamed out of the sky with guns blazing, ending the career of the infamous Baron von Doppeldecker (450 kills confirmed)...

The Golden Moment is shattered by an uncaring waitress with her pot of battery drainings. The throb of the engine fades and, through the window, I watch a shimmering wave transform my snarling beast into a squat, dumpy, and bug-bedecked caricature of an airplane. It leans ungraciously to the left and leaves its calling card on the asphalt in a random pattern of oil drips. Sounds a little like an Air Knocker, you say? You know, you could be right.

At some obscure moment in the annals of aviation, a group of frustrated designers decided it was high time to come up with the perfect lightplane, one that would be in every hangar throughout the land, being flown by every type of aviator. In order to compete forcefully in the mish-mosh that was the present competition, this Dream Plane would have to be powered by an efficient, albeit modest, engine that promised more speed than horsepower; carry a great payload faster and farther than the competitors; climb higher faster, land slower and be more patronizing to the ham-fisted student; have unexcelled crosswind capabilities; ad infinitum. All of these requirements were compiled, annotated, reworked, and then thrown out. And what did they come up with? Aeronca Champion is what it was.

An Aeronca is a lovable parody on flight—an animated cartoon that can become airborne. Its shape would give the Wright Brothers second thoughts about their bicycle business. There are bends and lumps where there shouldn't be and there are straight, architectural lines where there should be bends and lumps. Put any more hardware into the slipstream and it would fly faster sideways. Come to think of it, it will fly sideways.

What the Kon-Tiki was to yachting, the Aeronca is to powered flight. But miracle of miracles, the people came and, for some warped reason, embraced this flying chamber pot. They accepted the "Knocker" just like it was a real flying machine. From everywhere they came to learn to fly this critter and, shortly, more fledglings were given wings (one way or another) in the Aeronca than were in the famed Piper Cub, even.

Why, you ask? Hell, I don't know, I answer. Maybe what it took was a flight in the thing to open your eyes. All I know is that's what did it for me. One turn around the pattern and I was hooked.

For those uninitiated few of you (the rest can ride along and no smart comments, please), let's check you out in this son-of-a- wrinkled blueprint. Hop in front, or in back if you wish. Both seats go the same places. Hopefully.

First note how sensibly appointed the roomy cabin is. Instruments (both of them) right up front where you can see them. Fuel indicator, that piece of bent wire bobbing up and down on the nose. Keep an eye on the wire—when it goes down, so do you. Switch? Merely twist your left arm into its most uncomfortable position and grope around near your hip for a loose handle; we'll assume you're sitting front seat. You won't be able to read the markings, but take my word that all the way forward is BOTH. The little knob next to it is the carb heat, and to use this it would be best to climb into the back seat and use both hands to pull it out. Not too hard, or you'll really pull it out. Not to worry—dead-stick landings are good practice.

Out front, some patient soul will have to twist the prop for you while you are untwisting yourself in the cabin. After the tenth flip of the prop, you will notice the quizzical look on his sweat-beaded face. He is likely pondering the Continental nameplate staring at him with its motto: "As Dependable As the Nation."

In the interest of time, we shall assume that the engine is churning and that all systems are "go."

Someone once commented that an airplane is the most awkward and stupid means of surface transportation ever devised by man, being paralleled only by a sack race. He must have at the time been watching an Aeronca taxi. The most time-consuming and laborious chore you will ever log is getting from tie-down to take-off. To begin with, it will take full power to get the Knocker to consider moving. This theory is carried on into flight. Any of you who have ever tried to taxi over your chocks know the feeling.

Once rolling, the plane will generally head into the wind. Any wind. Even in dead-calm air, it will find some passing zephyr to favor, and no amount of rudder-and-brake combination will do anything but aggravate the situation. Its course is predestined and all you can do is hope there is a taxiway somewhere along that route. It will wallow and creak along prehistorically, responding only to generous amounts of throttle and coarse language.

For the take-off, push throttle full forward and it will begin rolling down the runway at a speed somewhere between a fast taxi and a trundle, exhibiting all the style and grace of a Dixie cup in a windstorm. However, an Aeronca Champ will actually become airborne faster than a Cub, pound for pound. Usually, because it instinctively favors the grassy areas alongside the runway, before flying there is a 50-50 chance you'll end up heading for the fence or those hangars on your left. This is known as the "cross-runway" take-off technique. Once mastered, it can be stimulating and quite showy, and everyone will notice your take-offs, including the FAA examiners. Tower personnel are legion who have hit the deck upon seeing a grinning Aeronca face heading straight (or, roughly straight) for their office.

Once aloft, you establish an "Aeronca Pattern," which is best described as something between an ellipse and a rhomboid octagon. No traffic problem here. Most of the other aircraft will follow you—if only out of fascination or curiosity.

Control surfaces are overabundant, so be tender with the rudder pedals or you are likely to find out what racing drivers refer to as "swapping ends." Other than that, the Aeronca is quite forgiving in its flight characteristics. There is ample time to consider all of your actions because you are not moving at exactly breakneck speed. This you will assume by the blowing bits of paper and leaves that pass you up, later by the bug splat on the trailing edge of the wings.

But the view is unparalleled! More-or-less clear plastic windows abound, and you will become increasingly aware of this facet as the day heats up.

Now for the landing—and here comes the part with the meat on it. Get a good line-up with the white runway stripe and mentally mark an "X" where you wish to touch down. Then forget it. Chances are good the only white line you will see after touchdown will have a sign: AUTO PARKING ONLY. Cut the throttle and notice how immediately nothing happens. No sweat. The Knocker has merely decided it doesn't want to land. This "Schweizer Effect" can be overcome by generous bursts of more coarse language and by energetically bouncing on the seat to shake it loose from the sky.

The landing itself is a thing to behold. From the ground, at least. They come from miles around to watch an Aeronca land. The last Super Bowl lost money because the word got out that there would be a Knocker landing.

Next we come to the "No-Bounce" gear. Aeronautical Corporation of America commissioned someone to come up with a snappy name for its new patented landing gear. I think it was Woody Allen who suggested the phrase, "No-Bounce." Some 15 feet up you can feel the tires groping for the runway—like sticking a toe in a hot bathtub. At five feet the Knocker will act as if it's trying to find a lost contact lens. Then touchdown comes. This normally will register between 2.6 and 4.5 on the Richter Scale. No matter where you think the ground is, it isn't. There's always about three feet left when you run out of fly. "No-Bounce" means that the wheels never leave the ground after first contact. The fact that the rest of the plane is performing a crude Lomcevak is beside the point. The wheels stay glued, even when you go careening off into the grassy area. I know some pilots who think it's salty to taxi around with their earphones around their neck. In a Knocker, that's where they end up after touchdown.

So much for the basic Aeronca familiarization. Perchance you find the tenor of this article deprecatory? Knock the Knocker? Me? Never!

I speak of this thing called Aeronca as a husband would speak of the wife who occasionally burns the toast and comes down to breakfast in hair curlers, or sometimes forgets where she parked the car. Little things that will either endear her to you or drive you to early basketweaving therapy. It is a conditioned love affair. You become conditioned. I'm fresh out of Aeroncas at this writing, but you can catch me doing my biweekly Trade-a-Planing with red pencil busy circling and deleting in the "Aeronca" column. I was spoiled many, many years ago by a squat and dumpy barge with a huge shamrock on its nose, and I am conditioned. I like earphones warming my neck.

Aeronca? If you have no particular place to go and don't have to be there at any particular time, fly it—you'll like it.