• Bird In The Cornfield

This (Air Force) tale is floating around the web, but in case you haven't seen it ...

58-0787 is the famous "Cornfield Bomber". In 1970, while assigned to the 71st FIS at Malmstrom AFB, Montana, its pilot ejected during an inflight emergency. The pilot somehow got himself in a flat spin -- this is considered generally unrecoverable in an F-106 and the book says to get out. After the pilot did just that, 58-0787 recovered itself from this unrecoverable position. In a vain attempt to recover, the pilot had trimmed it to takeoff trim and engine throttle back. After it recovered itself, it flew wings-level to the ground and made a near-perfect belly landing in a farmer's snow-covered field. When the local sheriff arrived on the scene, the engine was still running. On a slight incline, the F-106 would move slightly as the snow under it melted which got the sheriff quite energized. 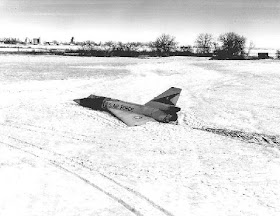 A depot team from McClellan AFB recovered the aircraft and it was eventually returned to service. When the 71st FIS was disbanded in 1971, 58-0787 went to the 49th FIS, my first squadron. Some considered it a lucky ship, others a jinx ship. We all referred to it as the "Cornfield Bomber".

We would occasionally run into ex-71st FIS guys at William Tell and ragged them unmercifully about the "emergency" so dire the plane landed itself.

58-0787 is in its 49th FIS markings at the USAF Museum and I have been to see this old friend several times. As pleased as I am to see the 49th FIS Eagle immortalized for millions to see, a part of me wishes they would paint one side in 71st FIS markings to ensure visitors know it wasn't the 49th that abandoned this perfectly good airplane. 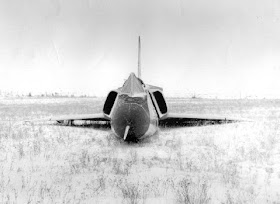 That story reminds me of 'Flip' Wilson jumping out of an A-7E. He had compressor stalls and the engine would not run above idle. He made a precautionary approach to Crow's Landing (outlying field around Merced, CA), landed long and ejected as he went off the end of the runway. The plane rolled to a stop undamaged in the field. Flip sheepishly went over, shut down the engine and retrieved his camera and jacket out of the cockpit. 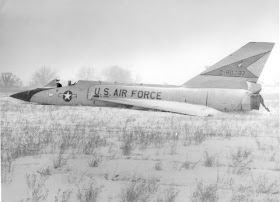 UPDATE: An excellent source of additional information on this incident and F-102 and 106s is here.

One of the accompanying F-106 pilots, IP Major Jimmy Lowe, observed the ejection and watched 58-0787 straighten out right after ejection. He reportedly transmitted "Gary - you'd better get back in it!".
Share