I've been after Skip 'Gunner' King (US Army, ret.) for details of this incident since Christmas. It was worth the wait.

Just prior to Christmas 1969, I was one of three people waiting at a remote strip somewhere near Phan Thiet for a Caribou ride to Cam Rahn or Na Trang. I was trying to get back to my unit at Lane AHP near Qui Nhon. Two passengers and an RTO.

We saw a Caribou approaching and assumed it was our transportation, but it initially just flew past. But it turned back towards the strip and landed.

The first thing we noticed was the painting on the nose, like Rudolf, but it was Santa... about that time the real Santa poked his head out the astrodome. 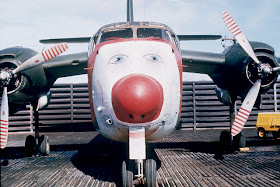 The aircraft pulled up, dropped the ramp and there was a bar that looked like a chimney, a couple of very attractive elves, Santa and some people in flight suits.

One of us asked why the aircraft had turned around. A guys in a flight suit replied that this wasn't a scheduled stop, but that when they saw the three of us out in the middle of nowhere, they figured we needed a visit as much as anybody.

The eggnog was great, the girls were beautiful, and my green and red goody bag hangs on the mantle every Christmas, as it has for the last 39 years.

I don't think I ever said "Thank You" to the guys in the flight suits. So... "Thank You" for one of my life's most memorable events.

Anybody know who those guys were?