This is reckoned to be true, at least by all who tell it. Goes back quite a few years to the late 50s or early 60s.

A bloke from Sydney flies out to the bush to visit a mate. Its around Christmas, and Christmas here in Australia is the summer - and in the bush its hot, bloody hot, stinking hot, Mate. While visiting, our flyer is talked into doing a favour for his mate. "We're having a bit of a Christmas party this Saturday," says the mate. "Over at the flying club. Y'know, for the kiddies and all. We need someone to dress up as Santa, fly in in the club's Tiger Moth, hand out presents, that sort of thing. Since you're not local, they won't know who you are. Interested?" 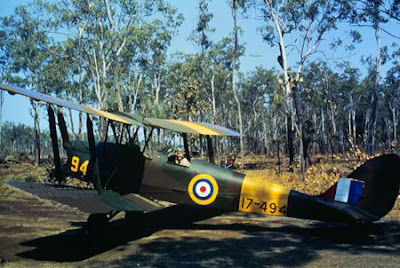 Our flier is no stranger to the intrepid Tiger Moth, having trained in one and later instructed in one, and amassed a good deal of hours on the type.

Saturday comes. Our flier is driven to a nearby bush strip, where waits the yellow Tiger and a Santa suit, under the watchful custodial gaze of the local strip's owner. Our hero is to wait until midday, then head off for the short flight to the flying club, buzz the field, land and dispense presents and ho ho hos. He suits up, complete with pillow for suit-front stuffing, wig and a white beard about 5 feet long.

While waiting, the local strip owner asks "Would you no like a glass of Christmas cheer?" and offers a cold beer. Knowing this is full well against established flying practice, and common sense, but also thinking along the lines of, it's a short flight, its hotter than hell in this suit, God knows I can fly the Tiger blindfolded. What the hell... one or two can't hurt, our hero agrees to imbibe with, "Well, 'Tis the season!"

Come showtime Santa checks that the toy sack is in the front cockpit, clambers into the back cockpit - no easy feat considering his extra girth with the pillow, and trying to not get fouled in 5' of beard - then with switches on and chocks away, roars off in the direction of the flying club field. The beard, all 5' of it, is proving to be a problem so Santa rolls it all up into a ball and places it on his lap.

Approaching the field he remembers the instructions to "Buzz the field a bit, mate. Make an entrance. Y'know... for the kiddies."

Its time for serious lack of clear thinking, thanks the wee dram he had before deaprture. Imagining that the 5' long beard would make a dandy streamer to show his arrival to the waiting crowd that is visible as a tight knot at the end of the field, Santa decides to chuck it out the side of the cockpit. ZING! ZANG! That damn thing is snatched by the 90 MPH slipstream, yanking Santa's head back and to the left, pinning his chin to his left shoulder. To make matters worse the wig is now also stylishly raked across his eyes, obscurring almost all forward vision. Santa is so stunned, the little Tiger Moth dips and begins a shallow descent - aimed right at the waiting group of Mums and Dads and kids.

Our jolly fat aviator is gripped by panic, and can only think of one course of action - that is to take all hands off the controls, reach out and grab that damned beard and haul it back into the cockpit. Of course, releasing the controls is often deemed a dangerous thing to do when flying low to the ground, and already in a decent. The Tiger's dive steepens, and he's now set to make an appearance like a kamikaze fighter. The crowd stops waving and falls silent.

A desperate Santa hauls that beard back in, tears the filmy web of fake hair from across his eyes and looks ahead, only to see the ground, and the wide-eyed gape-mouthed crowd, fast approaching. Emitting a short strangled cry, he hauls back on the stick and makes a terrifying low pass across the assembled mob, all of whom are too startled to run for cover.

The Tiger Moth is seen to zoom back into the sky. It makes a rather shaky circuit, turns final and bumps to a rough landing. After a few moments, as the engine ticks down to be finally still, a shaking and ashen faced dishevelled Santa emerges, muttering a few very half-hearted "Ho. ho. bloody hos".

Toys are dispensed, kiddies sit on Santa's still shaking knees, photographs are taken. Toward the end of the proceedings, the fliers mate appears and hands Santa a tall glass of cold beer (it is now safe to do so, as due to overwhelming public opinion it has been decided that when Santa leaves, it will be by car). Santa accepts the offered brew and look up into the eyes of his mate. "How close was it, Bruce?" he manages to croak out. His mate scratches his head and seems to consider a reply. "Well," he finally says," The kiddies were okay. But all the bloody adults had to duck."