Don't loose any sleep over it, you'll deal with it fine when it happens.

That's what we'd been told. But we'd still laid awake talking about just what we'd do if one of our six flightseeing airplanes went down. We made every effort to minimize the risks with our focus on pilot selection, training, maintenance, and operation standards. Still, entropy, like Murphy's, is a relentless law.

Early in our career as barnstormers, friends back East had it happen. One of their plane's went down after an engine failure and someone died. We contemplated getting out of the business right then. But we knew that attitude, taken to the extreme, would mean we'd spend our lives under a bed, quaking in fear of unknown--and unlikely--events. 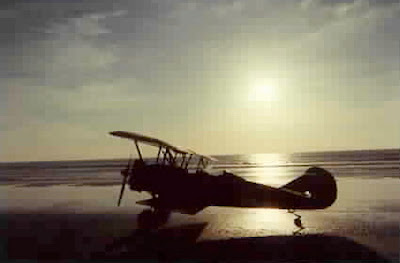 Later, when we decided we needed a longer season than Philadelphia's, we considered a business for sale on Maui. A promotional video showed picturesque but unforgiving twelve foot high sugar cane, volcanoes and lava. We kept looking. The wide beaches in San Diego attracted us from the beginning. Safety isn't an accident.

One night, out for dinner, we had a dry run. Cell phone rang, and when Kate answered she turned white. She regained some color as she said, "But, wait, we just locked our planes in the hangar." An air traffic controller was calling to say one of our planes had landed on a hillside near the cliffs of Pt. Loma. Turned out it was a Stearman with a big "RIDES" sign on the side. The owners had assured us they bought it just for fun. Turned out they were shooting promotional pictures for a ride business. Turned out they ran out of gas, for crying out loud. We got hit by a ricochet when the news reported: "A vintage biplane operating out of Palomar Airport crashed (sic) today on Pt. Loma while sightseeing."

So, on a rare Saturday off, about 1:30, when the phone rang in the office at home and a voice said, "This is CRQ tower. One of your biplanes went down over by the power plant," we dealt with it, just as we'd been told we would. I grabbed a jacket and cell phone and headed up the coast. Enroute I called Kate, on the way home from the gym, told her I didn't know anything except we had a plane down. She squeaked, "oh no," regained her composure and said she'd change clothes and call the airport. I had time to wonder where, and how, and what, and if, sorting through options and outcomes.

Cell phone rang again. Call from the airport said the plane was in the water. Plot sickens, options narrow, start to get the shakes from an overdose of adrenalin. Immediately, the phone rang again saying the plane was on the beach, everyone was fine, not a scratch. Pull off at a beach access spot and try to see it. Orange wings a mile or so away. Nobody here even aware of it. Back in the car.

North through Carlsbad almost to Oceanside, and after several wrong turns and double-backs find several fire trucks and rescue vehicles parked by some condos on the bluff next to beach access steps. Firemen look bored, see the "Biplane, Air Combat & Warbird Adventures" sign on the car and give me a thumbs up. I flash them a smile--maybe a grimace--and run down the steps to the beach. 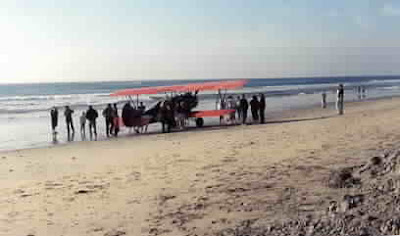 A few people are milling around, some taking pictures. Guy says, "was this a publicity stunt?" Yeah right. See pilot Vic standing with a couple of people and I say "Hey, great job." Two men with him say, "Sure was, smoothest landing I've ever experienced." They say they'd asked Vic as they were headed north how the thing glides and could they land on the beach. Flying back south they learned. One says his Dad was an FAA inspector. Other says something about coming back again for a re-fly.

Three stories from three different observers on board the aircraft, but they all agree the #2 jug wiggled very briefly and then shot up over the wing and arced down behind them into the ocean. Engine continued to produce a little power. Vic, in his best airline captain voice, announced over the intercom that they probably should land on the beach instead of going back to the airport if that was okay. He checked the beach for surfers and sun bathers, and greased 'er on. Shut down, climbed out, and looked her over. Said he ran out of business cards and could have used a carton of brochures. Ho-hum. 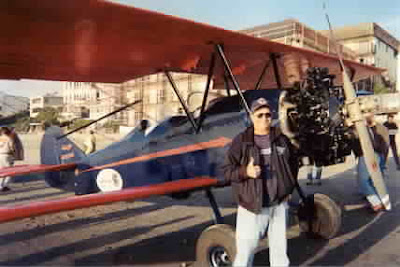 Exceptionally low tide had left a hard beach smoother than many runways. But the tide would come back in and it was going to be exceptionally high. Mechanic/pilot Skip arrives and we discuss how we're going to get the bird out of here, what we'll need to do to take it apart, etc. Four of us pushed it south a couple hundred yards, and then decided we'd better scout ahead to determine if the ramp where we were headed would work. Decide to reconnoiter north but by car. Drove along the oceanfront condos, got trapped by multiple "No Left Turns" and one way streets and ended up a long way from anywhere. Discovered a gate and driveway that seemed to lead down to a sand road out to the beach. No response in the call box at the curb. Left a probably incomprehensible message.

Back to the plane and see Channel 8 cameraman interviewing some animated surfer gesticulating wildly. Obviously the plane plummeted from the sky, practically knocking him off his surfboard while narrowly missing school children, a nearby orphanage, and the nunnery. Vic's standing back looking bored. Says they interviewed him too. It went fine. 11 o'clock news carries it, and he was right. We hear later that the piece was on in Chicago and Columbus, Ohio. Musta been a slow news day. Surfer dude's story ended up on the cutting room floor.

Kate arrives, breathless. Passengers get a handshake and pilot gets a hug. After giving her bird a careful once over and close look into the crankcase she says she's going to take the passengers back to the airport and their car. On the way back, "I was probably babbling," she says afterwards. She gives them each a logo jacket, offers them a re-fly, any ride they want, and they decide the warbird would be fun. They're so tickled about the whole thing they came back down to the beach to see how things are going. They decided to avoid the limelight and never let on to the camera crew they were the passengers. Petrol Pat, student rocket scientist, ex-gas passer for the FBO, and current hangar rat/plane loader exclaims, "This isn't a job, it's an adventure." Atta boy, smell the roses.

Skip and Susanne drive up the beach in their 4-wheel drive SUV. He reached through a gate, took one bolt out of the actuating arm of the multi-thousand dollar security barricade, and drove in. We turn the plane around, tie a rope to the tail and trundle up the beach. 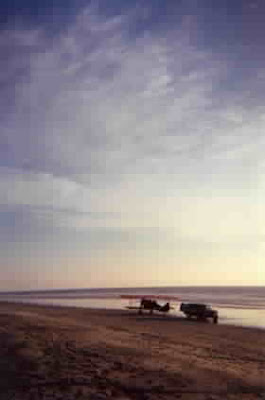 How we gonna get this thing outta here? Replace the engine and fly it out? Is it legal? Is it smart? Tow it up to the airport in the wee hours? Can we get it outta here with the wings on? Can we get the wings off and back to the airport without tearing them up? What will we use to move the airplane? Put the tail in a pickup and drag it? Will it fit on a car trailer? Is a flat bed too expensive? Does it matter? Larry calls Chief of Police, a pilot, (nice to have those kinds of friends) and explains the options. Chief sez don't ask me anything to which I have might have to answer no. Safest option seems to be truck it back to the airport, sans wings.

But how do you take the wings off a biplane with no overhead rafters, hoists or cranes? A host of helpful friends, numerous vehicles, collective thinking, care, and muscle is how. Just like the old days. Skip, and the gathered multitude, plunge into the "loosen everything up" first step, while schemes are hatched for actually removing everything without damage. The sun sets. Plan A is prop up lower wings, remove uppers. But how to reach them with lower wings in the way? Plan B is prop uppers, remove lowers, back pickup under uppers, lift them down. Parts are removed, labeled and neatly laid out for transport to the airport. Oh-oh, forgot to call for a truck. No sweat, be there in 90 minutes.

More pilots and friends arrive. Beginning to look like a hell of beach party. Matt and Candy arrive with gear and beer. Fun to have a Marine fighter pilot helping take the wings off the ancient relative of his supersonic steed. Full moon rises. Funny how the important things in life turn out to be simple: good friends, a paved driveway, a full moon, hot coffee. Numerous heroes pop in and out of the scene. Nelson from Shimoda Aircaft offers to carry wings back to the airport in his pickup. (His dog Chance--as in Nothing By--pees on the tires for good measure). Donnya, like her eager doggies Rudder and Tailwheel, runs here and there reaching tools, pulling nuts and bolts. Bronco and Biggles arrive after their dogfight flights and add competent advice and muscle. Eric and Mickey pull (and push) their weight. Even a groupie tow truck driver hangs around and offers his substantial girth and strong back.

Plan B works fine. Scary, propping the wings with a tall step-ladder and couch cushions, knowing the expense of carelessness or bad planning. But the wings (and helpers) remain unscathed. Plane sits forlorn in the moonlight, missing a cylinder, dripping dew, looking ungainly with only a center section hinting at airfoil and flight.

And so we waited. Seems the flatbed tractor trailer had been called out to retrieve an RV that rolled over on I-15. Their off pavement landing had been much more consequential, apparently. The process of turning it back over, loading it, driving back, and unloading it was slower than estimated. Repeated calls always produce "he'll be there within a half hour." We stand around in the growing chill, growing bored, growing hungry. Enjoying the full moon, thanking our lucky stars. Two wings, flying wires, fairings, and ladders are pickup-trucked back to the airport. Matt and Candy are back with pizza. Amazing how a slice of pizza can cheer you up.

Finally, a huge diesel tractor pulling an ingenious tilting trailer with sliding wheels arrives. Drivers swings around bouncing through the creek and weeds, backs up, stops, pulls the trailer wheels toward the tractor, neatly dropping the back end on the ground. We rig a bridle to the landing gear. They winch the aircraft onto the trailer, and level the bed. We lift on the two remaining wings and gently nestle them in cushions and blankets and strap them down behind the fuselage. Driver comments the truck will easily go 80 fully loaded. I comment the plane will fly at 40. Helper sez don't worry, he's been driving this big Class A rig for two months. Oh, goody.

Parade back to the hangar is uneventful, drawing little attention. Odd feeling of skulking back from a crime. Airport is quiet. Cold blue taxiway lights are offset by warm hangar lights and golden moon. The beacon winks, bored, in the background—seen all this kind of thing before. Wings are carefully stacked in the back of the hangar, fuselage looking paraplegic next to her sister ship. Cub nestled in the corner looks on, bemused at the fuss. Lower the hangar door, turn out the lights. 10:15.

Another day in the life of a barnstormer.