Over the years I've owned and flown three biplanes built by Travel Air Manufacturing Company in Wichita, Kansas. The principals of the operation were Clyde Cessna, Lloyd Stearman, and Walter Beech, although the outfit was, it turned out, a success thanks to Olive Anne Mellor who later became Mrs. Beech and Chairman of Beech Aircraft. Here's some fascinating background on how other names you know became part of aviation history.

How many of you know that in 1910 the mighty Martin Marietta Company got its start in an abandoned church in Santa Ana, CA? That's where the late Glenn L. Martin with his mother “Minta” Martin, and a mechanic named Roy Beal, built a fragile contraption in which Glenn “taught himself” to fly. 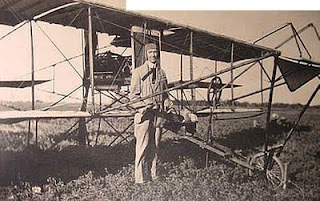 It has often been told how the Douglas Company started operations in 1920 by renting the rear of a barbershop on Pico Boulevard in Los Angeles. The barbershop is still there. 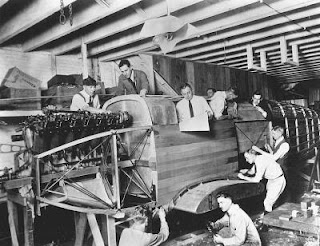 The Lockheed Company built its first Vega in 1927 in what is now the Victory Cleaners and Dryers at 1040 Sycamore Avenue in Hollywood. 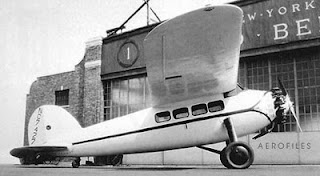 Claude Ryan who at 24 held a reserve commission as a flyer, had his hair cut in San Diego one day in 1922. The barber told him how the town aviator was in jail for smuggling Chinese across the border. Claude investigated and stayed on in San Diego to rent the old airfield from the city at $50 a month and replace the guy in the pokey. He agreed to fly North instead of South. 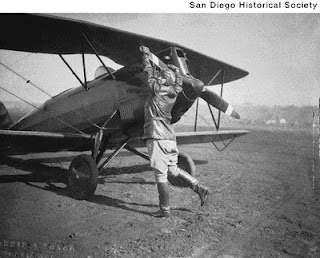 In 1928, the Curtiss Aeroplane and Motor Company, Transcontinental Air Transport (now TWA) and the Douglas Company chipped in enough money to start North American Aviation, a holding company. The present company bearing the Northrop name came into being in a small hotel in Hawthorne. The “hotel” was conveniently vacant and available because the police who raided it found that steady residents were a passel of money-minded gals who entertained transitory male guests. 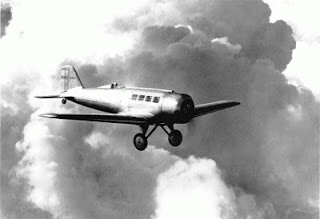 After Glenn Martin built his airplane in the church, he moved to a vacant apricot cannery in Santa Ana and built two more. In 1912 he moved to 9th and Los Angeles Streets in downtown Los Angeles. Glenn was then running a three-ring-circus. Foremost, he was a showman who traveled the circuit of county fairs and air meets as an exhibitionist aviator. Secondly, he was an airplane manufacturer. He met his payroll and bought his lumber, linen and bailing wire from proceeds of his precision exhibition flying. His mother and two men ran the factory when Glenn was risking his neck and gadding about the country. One of the men was 22-year old Donald Douglas who was the “engineering department” and the other was a Santa Monica boy named Larry Bell, who ran the shop

The third circus ring was a flying school. It had a land plane operation in Griffith Park and later at Bennett's Farm in Inglewood, and a hydroplane operation at a place that's now part of the Watts District. A stunt flyer named Floyd Smith ran it. One of his first pupils was Eric Springer, who later became an instructor and then Martin's test pilot, still later the test pilot for the early Douglas Company, and then a Division Manager. 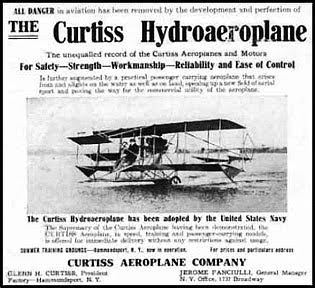 Eric and Floyd taught a rich young man named Bill Boeing to fly. Having mastered the art; Boeing bought a Martin biplane, hired Ross Stem, Glenn's personal mechanic, and shipped the airplane to Seattle. Later, when it crashed into the lake and Boeing set about to repair it, he ordered some spare parts from Martin in Los Angeles. 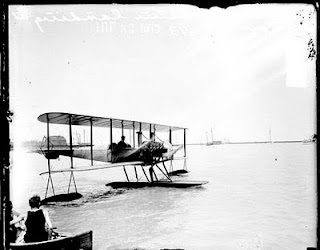 Martin, remembering the proselytizing incident with Ross Stem, decided to take his sweet time and let Boeing stew. Bill Boeing said, “To Hell with him”, and told Ross Stern to get busy and build one of their own.

Boeing had a friend named Westerfelt and they decided to form a company and build two airplanes. These two “BW” airplanes bore a remarkable resemblance to the Martin airplane, which, in turn, had been copied, from Glenn Curtiss. There seems to be a moral about customer relations and product support mixed up in this episode. 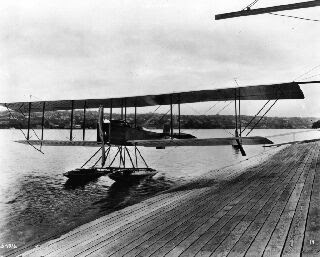 During WW-I, a bunch of sharpies from Wall Street in New York got control of the Wright Company in Dayton and the Martin Company in Los Angeles. They merged the two companies into the Wright-Martin Company. They sent a young man named Chance Vought to be their Chief Engineer. Donald Douglas lost no time in quitting and went to work for the U.S. Signal Corp.

The Wright-Martin Company started building obsolete “standard” biplanes and Hispano-Suiza engines, with the latter under a license agreement with the French Government. Martin told them what they could do with them, and took off for Cleveland, taking Larry Bell and Eric Springer with him.

Having the backing of a baseball mogul to build a new factory, Martin was soon joined by Donald Douglas who went to work and came up with the design of the Martin Bomber. It came out too late to see service in WW-I, but showed its superiority when General Billy Mitchell made everyone mad at him by sinking the captured German battlefleet. The deathblow to the allegedly Dreadnaught “Osfriesland” was delivered by the Douglas designed Martin Bomber.

At Cleveland, a young fellow called “Dutch” Kindelberger joined the Martin Company as an engineer. Also a veteran Army pilot from WW-I named Carl Squier became Sales Manager. His name would become one of the most venerable names in Lockheed history. Back in 1920, Donald Douglas had saved $600 and struck out on his own. He returned to Los Angeles, found a backer, David Davis, rented the rear of a barbershop and some space in the loft of a carpenter's shop where they built a passenger airplane called “The Cloudster”

Claude Ryan bought this a couple years later and made daily flights between San Diego and Los Angeles with it. This gives Ryan the distinction of being the owner and operator of the first Douglas Commercial Transport, and certainly a claim to be among the original airline passenger operators.

In 1922, Donald Douglas was awarded a contract to build three torpedo planes for the U.S. Navy. Douglas lived in Santa Monica, but worked in Los Angeles. Away out in the wilderness at what is now 25th Street and Wiltshire Boulevard in Santa Monica, there was an abandoned barn-like movie studio. One day Douglas stopped his roadster and prowled around to investigate. The studio became the first real home of the Douglas Aircraft Company.

With the $120,000 Navy contract, Donald Douglas needed and could afford one or two engineers. He hired my brother Gordon Scott newly over from serving an apprenticeship to the Martinside and the Fairey Aviation Companies in England. Gordon was well schooled in the little known science of Aviation by 1923.

My first association with some of the early pioneers occurred when I visited my brother Gordon at the barn at 25th Street. I found him outside on a ladder washing windows. They were dirty and he was the youngest engineer. There were no janitorial services at the Douglas Company in those days.

Gordon introduced me to Art Mankey, his boss and Chief Draftsman, and four of his fellow engineers. There was a towhead guy called Jack Northrop, a chap named Jerry Vultee, and a fellow named Dick Von Hake, a reserve Army flyer. Jack Northrop came from Santa Barbara where he had worked during WW-I for the Lockheed Aircraft Manufacturing Company. The fourth member of the Engineering Group was Ed Heinemann. They were all working on the design of the Douglas World Cruisers. Shortly afterwards, Jack Northrop left the Douglas Company in 1926. Working at home, he designed a wonderfully advanced streamlined airplane. He tied back with Allan Loughead who found a rich man, F. E. Keeler, willing to finance a new Lockheed Aircraft Company.

They rented a small shop in Hollywood and built the Northrop designed Lockheed “Vega”. It was sensational with its clean lines and high performance.

In May 1927, Lindbergh flew to Paris and triggered a bedlam where everyone was trying to fly everywhere. Before the first Vega was built, William Randolph Hearst, publisher of the Hearst newspaper chain, bought it and entered it in the Dole Race from the Mainland to Honolulu, which was scheduled for 12 August 1927.

In June 1927, my brother Gordon left the Douglas Company to become Jack Northrop's assistant at Lockheed. He also managed to get himself hired as the navigator on the “Golden Eagle”, the name chosen by Mr. Hearst for the Vega, which hopefully would be the first airplane to span the Pacific.

The race was a disaster! Ten lives were lost. The “Golden Eagle” and its crew vanished off the face of the earth.

With its only airplane lost under mysterious circumstances, a black cloud hung heavily over the little shop in Hollywood. However, Captain George H. Wilkins, later to become Sir Hubert Wilkins, took the Number Two airplane and made a successful polar flight from Nome, Alaska to Spitzbergen, Norway. After that a string of successful flights were to put the name of Lockheed very much in the forefront of aviation.

At Lockheed, Jack Northrop replaced the lost Gordon Scott with Jerry Vultee. In 1928, Jack quit the Lockheed Company to start a new company in Glendale called Avion. Jerry Vultee then moved up to become Chief Engineer at Lockheed. He hired Dick van Hake from the Douglas Company to be his assistant. A young man named Cliff Garrett joined the Lockheed Company as the driver of their pick-up truck.

I went to work at Lockheed shortly after the “Golden Eagle” was lost. I became the 26th Lockheed employee. The Vegas were made almost entirely of wood and I became a half-assed carpenter, generally known as a “wood butcher”

At this time, General Motors had acquired North American Aviation, which consisted of several aircraft companies in the East. Ernie Breech, formerly with Bendix but now with General Motors, hired “Dutch” Kindelberger away from Douglas to head up the aircraft manufacturing units. “Dutch” took Lee Atwood and Stan Smithson with him. The companies involved were Fokker Aircraft, Pitcairn Aviation (later Eastern Airlines), Sperry Gyroscope and Berliner-Joyce. Kindelberger merged Fokker and Berliner-Joyce into a single company and moved the entire operation to Inglewood, California.

Thus, a handful of young men played roles, which profoundly affected all of our lives and the lives of millions of other Americans. They changed Southern California from a wasteland with a few orange groves, apricot and avocado orchards and the celluloid industry of Hollywood to a highly sophisticated industrial complex with millions of prosperous inhabitants.

This technological explosion had some very humble and human beginnings. The “Acorns” took root in some strange places: a church, a cannery, a barbershop, but from them mighty Oaks have indeed come to fruition.

From a speech given by Mr. Denham S. Scott to the AIA on March 19, 1968.
Reprinted from North American Aviation Retirees Bulletin - Summer 2001
No comments:
Share
‹
›
Home
View web version