Today's personal computer flight simulators are a hair's breadth from reality with add-on weather and terrain packages. Recently I added a freeware aircraft carrier package to Microsoft Flight Simulator X, and it brought back sights and sounds (if not the smells of JP-5, oily steam, or sweat) from forty years ago. 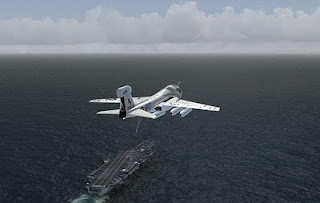 With a couple of mouse clicks I positioned a carrier, flight deck spotted for recovery, ten miles ahead of my Navy/Grumman EA-6B. Into the break at 300 knots, the sight picture brought back a wave of memories. 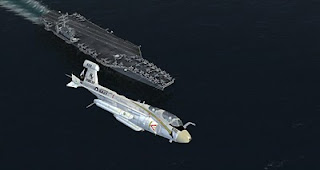 One indelible memory came from the time the Air Boss called, "Keep it flying," as a stiletto Vigilante staggered into to the air, slowly rolled upside down, and disappeared in a noiseless splash. 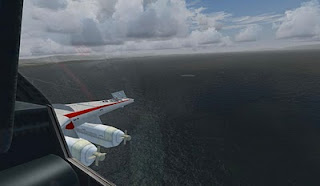 Or the night, downwind after a bolter, when I heard a whine under my ejection seat and knew it was a hydraulic pump cavitating.Who knows how I knew that, but a calm pilot and the emergency hydraulic system got us back on deck where they threw chocks under the tires with us still in the arresting gear, and then towed us out of the wires, straight-wing, to the consternation of Flight Deck Control with a crowded deck.

After almost 45 years (I learned in college, before joining the Navy) and 10,000+ hours of flying I figured, yeah, I can do this. Carrier ops can't be that hard. Especially when the pink bag-'o-flesh called 'me' isn't at risk.

First pass was, "I know there's a ship out there somewhere. Oh, there it is. Okay, let's take 'er around and try that again."

Next pass was, "No, no, no. Two thousand feet MSL abeam will never work." The Air Boss would have had a conniption if he saw what I did to get back into a reasonable semblance of a 180.

But the picture was, oh, so familiar. "Been there, done this" kept coming to mind.

"Prowler, ball, two point six," I tell the LSO so he knows we're an EA-6B, not a similar looking Intruder, and so he knows our fuel state.


What are those red lights on the lens? Shit, I'm low, real low. Power, power, POWER. Wave off. Boards in, watch the AoA.

Over the ship at PriFly eye-level, I unaccountably hear a flight deck announcement, and am reminded that this is an almost, but not quite perfect, $30 simulator not a $30 million sim, nor a time machine. 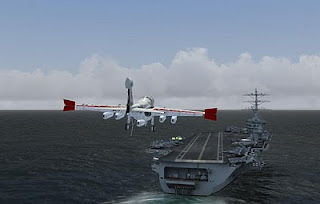 Yellow shirts move around the flight deck, cranials and mouse ears in place. Low slung tugs, in modern white paint, move among the parked F/A-18s and E-2Ds, none of my era's yellow gear pushing A-3s, A-6s, and F-4s, reminding me this is the CV-68 Nimitz — CVA-64 USS Constellation, or Connie, has has been retired for years. My kids think it's funny that the San Diego Air and Space Museum has an A-6 with my name on the canopy rail. I think they ought to stuff me when I die, and just let fly west forever right there.

Next pass starts out badly, but miraculously turns into a trap. LSOs little black book would probably read something like BRFAPPS3: brilliant recovery from a piss poor start,  3 wire. 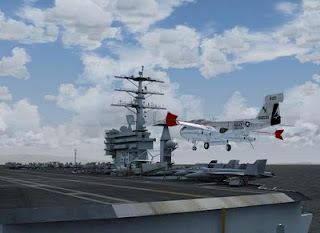 I wasn't so lucky on the next few tries, including one pass where I got a heart stopping look up at the flight deck after pulling off too much power.

But I did manage one OK3, at least from my perspective. Paddles probably would have though otherwise. And it wasn't dark, and the deck wasn't pitching, and I wasn't worried about dying, or worse yet, embarrassing myself. 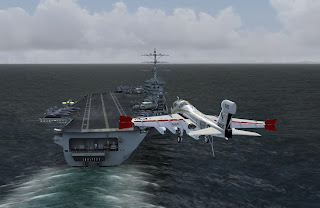 On deck, thumb the boards in, hook up, flaps up, start the wing fold, taxi clear, yellow shirt gesturing frantically. Taxi toward the deck edge, cockpit hanging out over the water before a turn so the main mounts almost rub the steel curb that (usually) keeps you out of the catwalk. Looking down at nothing but water going by, another flash of recognition. Watch the power as we come around so we don't blow a plane captain in the water or suck someone down an intake. Shut her down, canopies open, no blast of kerosene wind, but the Air Boss is calling for the re-spot in preparation for the next launch. 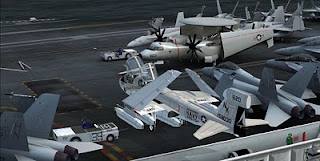 Another day, another dollar. Only nine months to go, my memory recalls, and it all counts toward retirement.

"Honey, dinner's ready," my wife purrs, "You want beer or wine?" The fantasy evaporates, replaced by a dream come true.

Maybe I'd better try some FCLPs tomorrow, before I go back out to the ship?

UPDATE 1: I was being facetious when I suggested some Field Carrier Landing Practice. Turns out there is an add-on (free) FLOLS trailer that you can place anywhere. So I plunked one down at NOLF Coupeville and went around the pattern a few times. It helped! Just back from a session on the Eisenhower, amidst a bunch of CARQUAL T-45s (free and better than many payware aircraft), and did better.

UPDATE 2: If you've ever bounced at Coupeville you know the picture below isn't quite right. There should be a tiny landing area painted on the left side of the runway, and lights are way too dim. Well, vLSO (as in virtual LSO, and free) fixes all that, and adds a whole bunch more fun. 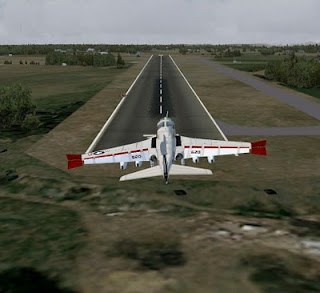 Not only will vLSO tell you if you're high or low, fast or slow, or need a little right for lineup, he'll tell you if you're wide at the 180, long in the groove, and get very perturbed if you try a 'taxi one wire' or, CAG forbid, ignore a wave off. The cut pass will show in your logbook and on the greenie board for all to see. And the package comes with a nice scenery add-on for East and West Coast NOLFs. 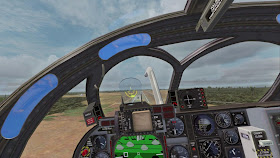 What's more. vLSO allows you to put a tanker in an orbit over the ship so you can go get a plug and some gas if things really aren't going well. So far I've managed to hit the basket once. And I mean hit, literally, not plug. 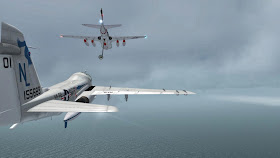 Never thought it was a good idea to jump out of a perfectly good airplane. Although there are those that do. And, if you ask me, you gotta be kinda goofy to do it. (I wonder what Vmc is for a Twin Beech in this configuration?) 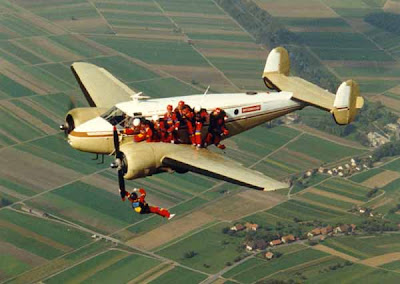