• Do One More Roll For Me

One night during a bombing raid on Hanoi, I peeked out of my cell and watched a flight of four F-105s during their bombing run. 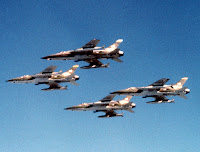 As they pulled up, it was obvious that lead was badly hit. Trailing smoke, he broke from the formation and I watched the damaged bird until it disappeared from sight. I presumed the worst. As I lay there in my cell reflecting on the image, I composed a toast to the unfortunate pilot and all the others who had gone before him.

On New Year's Eve 1968, Captain Tom Storey and I were in the Stardust section of Hoa Lo (wa-low) Prison. I whispered the toast under the door to Tom. Tom was enthralled, and despite the risk of terrible punishment, insisted that I repeat it several more times until he had it committed to memory. He then promised me that when the time came, and we were again free men, he would give the toast at the first Dining-In he attended.
For you civilians, a Dining-In is a dreary formal affair with drinks, dinner, and forced joviality and comradeship where officers get to dress up like the head waiters in "The Merry Widow" -- that's the American version; I've heard that the Brits, who created the damn things, have a rollicking good time.

Tom's first assignment following release in 1973 was to the U.S. Air ForceAcademy. During that same year the Academy hosted the Annual Conference for General Officers and Those Associated Dining-In. The jovial clinking of glasses accompanied all the traditional speeches and toasts. Then it was Tom's turn. Remembering his promise so many years earlier, he proposed Jerry's "One More Roll." When he was finished there was total silence.

We toast our hearty comrades who have fallen from the sky,and were gently caught by Gods own hands to be with him on high.
To dwell among the soaring clouds they have known so well before,from victory roll to tail chase at heavens very door.
And as we fly among them there, we're sure to hear their plea:Take care, my friend, watch your six, and do one more roll for me.