Wrote this years ago as a promo piece for Bill and Homer (a drinking town with a fishing problem).  It's a little too travelogue-y in retrospect.

"I'll show you the Alaska you came to see, but don't call me a bush pilot, it's over blown," says Bill de Creeft. Named 'Alaska Man Of The Decade' for selfless and daring rescues, Bill says, "Thirty years ago the Coast Guard didn't have many helicopters, so I was frequently called to help out. At that time it was just part of living here; if someone was in trouble and you had an airplane, you were just naturally going to be out there trying." 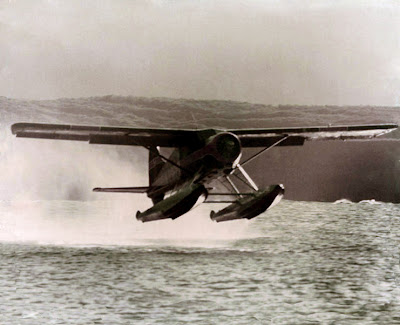 In Alaska, flying is almost as much a part of everyday life as a commute on the Interstate in the "Lower 48." But pilots, like drivers, vary in skill and experience. When you hire one as a tour guide, picking the right one is an insurance policy and also your guarantee you'll see what Alaska offers. 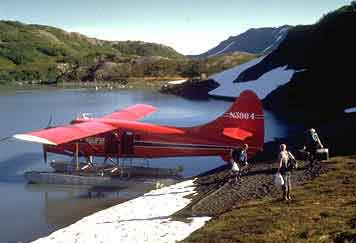 "Today, as a sightseeing pilot, my job is different," Bill says, "my responsibility is to take care of my passengers. Sometimes when the weather's bad I may not take you anywhere. I'd rather disappoint you than scare you. But if the weather cooperates and you'll come with me in an airplane that's been an old friend for over thirty years, we'll see Alaska together." 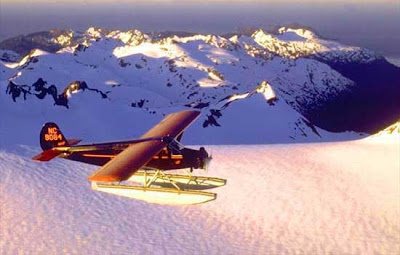 Departing from Beluga Lake in Homer southwest of Anchorage, Bill and his floatplane will give you a bird's eye view of whales breaching in the bay, brown bears fishing in rivers, salmon by the thousands, moose meandering through meadows, big horn sheep gazing at you from impossibly steep mountainsides, and more eagles in one tree than you can count. You'll even see a nearby town, Soldotna, built on a dozen tiny islands that has bridges instead of streets, farmers with boats instead of tractors, and herds of oysters instead of cows.

Bill is a weathered version of Sean Connery. He built the log cabin they live in working outdoors only when Alaskan weather was so bad he couldn't fly--which in Alaska means either white-out blizzard or zero-visibility downpour. He orchestrates an annual neighborhood paella cookup in honor of his Spanish ancestry. "Who knows," he says,"Maybe I'm a Count, not a no account". Picture a man who can bring tears of pleasure to your eyes when he plays the bagpipes. 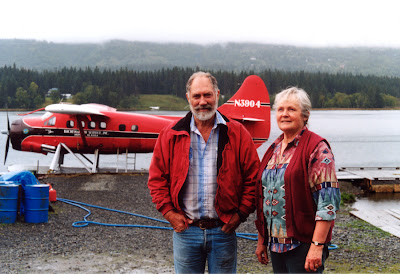 His wife Barbara quietly puts up with all this while firmly running Kachemak Bay Flying Service. Barbara's the one who worries about where the money's going to come from for the overhaul on their engine while Bill dickers to buy a sister-ship of their aircraft that went down on the North Slope in the '30s and hasn't been seen since. Picture a woman who gently rocks her granddaughter while she calls on the shortwave radio to make sure Bill is okay flying over treacherous Cook Inlet. 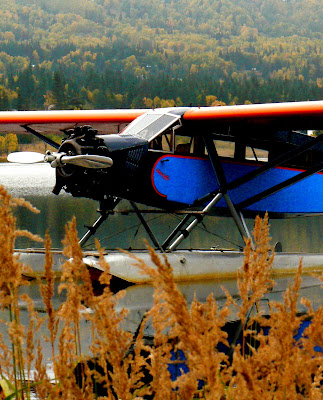 Their aircraft, a Travel Air S6000B, is extraordinary too. It was built back when there were round engines, and rag wings, and shiny varnish on golden wood ribs. With wicker seats, mahogany framed roll down windows, fresh flowers in a crystal vase. a tiled lavatory and broadcloth seat covers it personified luxury aloft in 1929. Fledgling Delta and Braniff flew them and they were touted as the "Limousine of the Air." 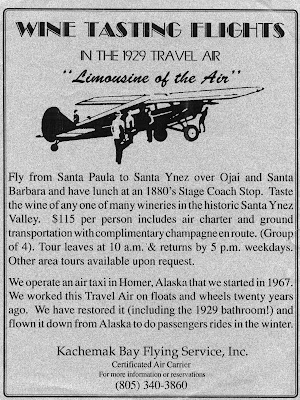 In the glory days of the mid-30s, Phillips Petroleum even sponsored their aircraft (not one like theirs, theirs) and a crew that stayed up for 13 days without a landing or, for that matter, a bath. A hose was lowered from another aircraft to transfer fuel and, clinging to a makeshift catwalk, the crew changed spark plugs inches from the spinning propeller, thousands of feet from the ground. 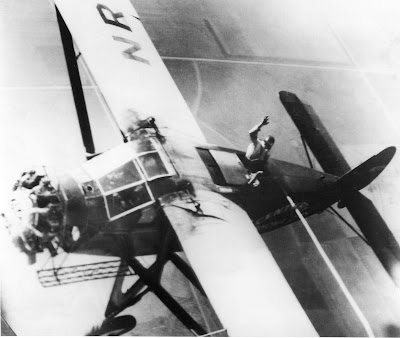 Bill knew we owned a Travel Air biplane made by the same company as his floatplane and wanted us to know what Alaska was like during the Travel Air's heyday. So the first night we flew out to Willard's Moose Camp on Caribou Lake. The cabin there was a remnant from the '20s built as a shelter for pilots forced down by weather. Eight feet square, it had a wood stove that used sawdust mixed with diesel fuel for fire starter. Amenities included flour sacks full of sawdust for mattresses on the bunk bed, and slices of truck inner-tube for springs. It was a moose lodge, but it was bears that partied all night. We hardly slept worrying about the noisy neighbors, what with the nice collection of nuts and berries someone thoughtfully provided.

The next day Bill picked us up at the dock and we flew to a lake at the foot of a glacier. Some travelers go to the ends of the earth to get away from it all. Go to Loonsong Mountain Lake Camp and you'll understand what being away from it all really means. Bill carried every stick of wood, every nail, every gallon of paint, and every knife and fork for Loonsong into the tiny lake that it sits on. It took over a hundred trips about 30 minutes in the air each way. You can't get there in by land except hiking for days. Stay a week and he'll drop the Sunday paper on the porch for you as he flies over. 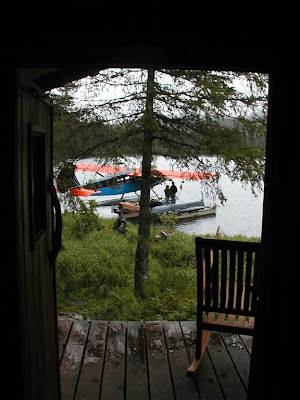 Loonsong cabin, with its spacious rooms and massive posts and beams, is constructed with giant spruce logs cut from where the building stands now. Charming antiques, art, pioneer artifacts and a cozy wood burning stove warm the living room. A kitchen, bath, two guest rooms and a sleeping loft, accessed by hand-hewn stairs, accommodate a single couple, family, or up to six friends. Huge picture windows frame the lake, forested mountainsides and the blue ice-face of a vast, unnamed glacier. The sod-roofed Finnish sauna will soothe your body and soul at day's end.

The next night we spent back in Homer at Wild Rose Cottages, log cabins on East Hill just two miles out of town. With cooking facilities, huge windows, and an awesome view of Kachemak Bay, glaciers, and mountains the place was wonderful. Each cabin is 'Alaska homeyness' at its best with lots of amenities and comforts. Indoor-living accommodations make each cottage great in sunshine or rain, summer or winter. There's even a floppy-eared rabbit that thinks he's a chicken and hangs out with the locals.

To sample more modern accommodations, we tried Land's End Reanort, a 80-room hotel where many of the rooms face Kachemak Bay and have private viewing decks. These comfortable rooms come in a number of different styles to suit any taste and budget including 21 deluxe rooms added in 2001. They all have bay windows (Kachemak Bay, that is) with incredible views, including active St. Augustine volcano. A unique feature are the hand made beds fabricated locally from beetle-kill spruce. Sounds of the surf made our room a private haven after a busy day. 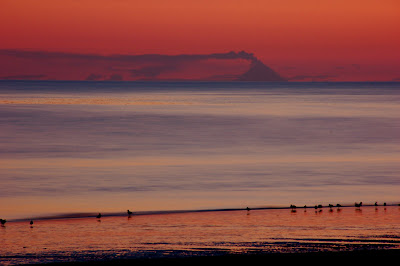 We flew across the inlet to Kachemak Bay Wilderness Lodge, nestled among towering spruce, on an island peninsula. The beauty and uniqueness of the lodge and its surroundings are a delight. The artistic detail in every building was beautifully planned and executed. Each delightfully unique cabin has fine art, homemade quilts, tile and cedar bath, a picture window and electricity--something you won't always find in the wilds.

Views from the solarium and lodge windows frame China Poot Bay's exquisite estuary and a panorama that unfolds from sea level to the top of nameless 4,000' mountains. Yes, there are so many mountains and so few people there are actually mountains that haven't been named. The friendly experienced staff of trained naturalists shared the country with us at our pace. Trails radiate from the lodge and invite exploration. As we amble over ancient bedrock and through dense spruce forests, each unexpected opening in the trees offers a visual gift: a sea otter sleeping on the water below, a kingfisher flying to its burrow, a whisper of smoke rising from a distant volcano.

Bill dropped us off at sea for our final treat. The Katmai Coast is an unlikely destination for a tourist boat, but skipper Michael Parks, and first mate Lydia Rabottini, along with owner John Rogers, have been running a heavyset 70 foot tugboat built for the U.S. Army 50 years ago. With thick wooden beams built into its rising lines, motor vessel Waters has cruised for years during the summers exploring the coast and sharing views of the bears of Katmai with people seeking a unique Alaska adventure.

When you go to Alaska you will want to go flying. Alaska is a place where pilots are beloved and airplane noise reason for rejoicing. Most of the places we visited would take days by car and hours by boat to reach (if you could get there at all) but only a few minutes by air. Visit Kachemak Bay Flying Service in Homer, Alaska and you can fly Alaskan skies with a humble hero that in 40 years has accumulated over 20,000 hours of flying experience. And he will show you the Alaska you went to see, just as he promised.