• Your mission for today

September eleven is about as far back in history now as World War Two was when, as a kid, I began to understand the stories I heard from my Dad about heroism in the skies of the Pacific and Europe. 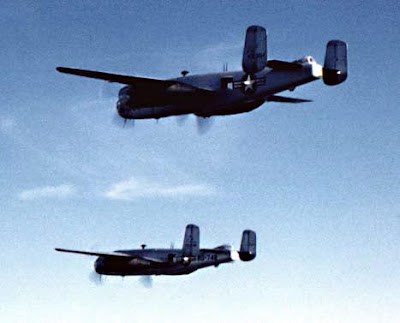 Imprinted with tales of low level missions in the Pacific and images of 1000 plane raids over aircraft plants in Germany, I'm still thrilled by moments captured on film of fighters slicing through formations, just as I'm horrified by bombers (and those same fighters) going down in flames as crewmen, mere specks, tumble out to parachute into an uncertain future.

Movies such as Twelve O'Clock High and Memphis Belle allowed me to fly along, at least vicariously, on those missions and understand, in a small way, the human toll of such events. I always wondered what it was like to be part of the action. I now know, at least in a virtual way.

Thanks to modern personal computers and an amazing piece of software called IL2 1946 I now appreciate, at least a little, the feeling when someone calls, "Flak ahead boys," or "Fighters, two o'clock!" 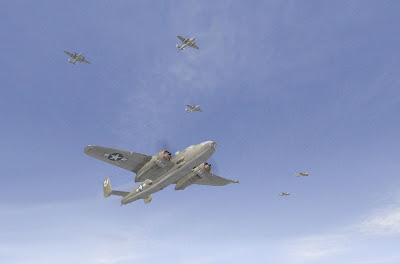 Its 1943 and the US Army Air Forces bombing campaigns over Germany are at a peak. Large formations of bombers attack targets inside Germany almost daily in broad daylight. My mission was as the pilot (I could have been a bombardier or gunner) of a B-25, part of a 36 plane formation at 15,000 feet on the way to attack a factory in Berlin. 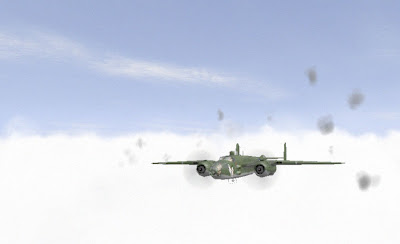 I could also have chosen to fly an Me-109 or FW-190 and try to prevent the inevitable. 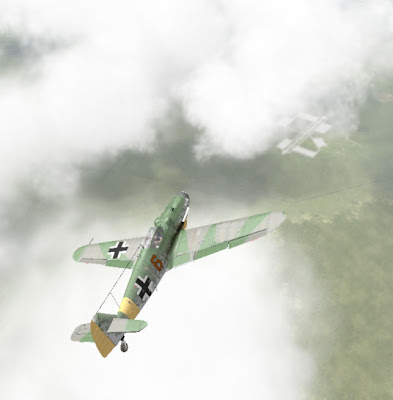 The mission started with a long period of nervous boredom and concentration trying to stay in formation. Droning along I watched checkpoints--a road here, a bridge there--pass under us. Checked against the chart, it seemed we'd never get there; but, knowing what was ahead, getting there quicker wasn't necessarily better. Then we heard the fighter call, and our escorts peeled off to attack the first wave of Luftwaffe planes. 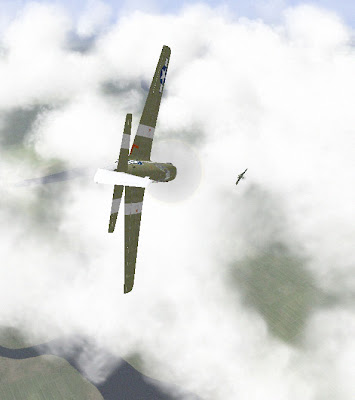 Early Mustangs, P-51Bs, they stayed with us as long as they could before, low on fuel, they had to return to England. After that, we were on our own till our little friends rejoined us on the way back. And the Luftwaffe knew it. Soon more enemy fighters were on us, and we started to lose bombers.

"Blue six is going down. We're bailing out. Tell my wife I love her, willya Joey?"

Then suddenly the fighters are gone, and we knew what that meant. As if by magic, gray lethal cotton balls appear in the sky. When one materializes close to our right, the aircraft bucks, the controls shake, and I hear shrapnel hitting the aircraft. Check the gauges. Oil pressure is going down and oil temp is going up on #2. Throttle to idle, mixture to cut-off, prop feather. With our load of fuel and four 500 pound bombs we start to lose altitude.

Press on, or salvo them now and head home? We're here to do a job, and we didn't get the worst of it, so we press on. 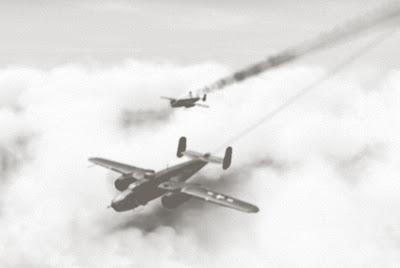 Hit a function key and the scene switches to a factory in Berlin. As we survey the quiet neighborhood from the ramp of a Messerschmidt factory, air raid sirens begin to blare. Hit the key again and we switch scenes to an anti-aircraft crew as it swings into action. Look up, and through breaks in the clouds tiny specs in formation pass over. In a disorienting moment I realize I'm looking at myself, their target, fly over.

The emotional swing is real . . . bomb the bastards or shoot down the murderers. It just depends which side your on. Suspension of disbelief is easy. It's exciting, interesting, and disturbing to experience both sides of the action--to have an inkling of what it must have been like for those heroes from both sides that put their lives on the line in the 1940s.
1 comment:
Share

What an odd experience, something from Alice In Wonderland in a way.

I've been invited to join a group of people that I've never met, who are located all over the world 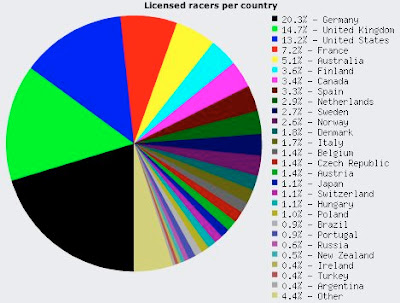 in places I've never been, to drive cars that don't exist on race tracks that are only simulated.

And it matters. That's the odd part.

It's all even stranger, somehow, when you consider 99.7% of the people I race against are younger than me (with a certain margin of wiseass error on the top end). 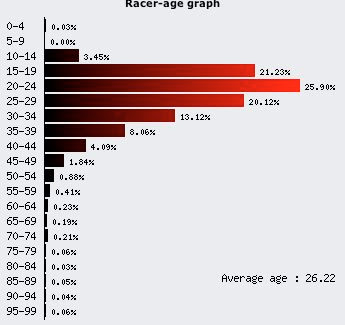 Would the Maserati brothers have understood?

They'd recognize a starting grid, I suppose. But the cars would look futuristic, to say the least. A company like Intel, of course, wasn't even in anyones wildest dreams. BMW, though, they would recognize. They made aircraft engines back in the Maserati boy's day (thats' where the stylized propeller logo came from). 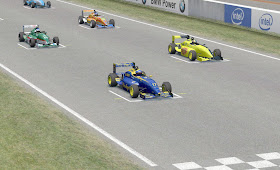 And they certainly wouldn't be able to grasp, pre-telephone folks that they were, the communication technology involved, never mind the computers. 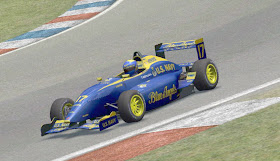 Here's a real short clip from an 18mm movie I took from the LSO platform of a North American RA-5C 'Vigilante' landing on the USS Constellation (CVA-64) circa 1973.

For those who have never had the privilege of seeing it from the other perspective, here's the view from an F-14 (not my video).

My kids think it hilarious that my name is on the side of an A-6 in at the San Diego Aerospace Museum, "you're so old you're in a museum." Yeah, well when I die, stuff me and put me in the cockpit. I'll be happy. 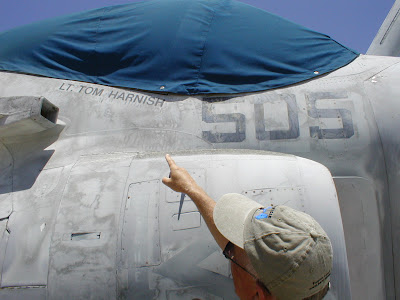 It seemed like a good idea at the time?

This vid just proves once again that when, as a pilot, you think, "Watch this!" or, "Wait till they see this!" you're about to do something that should make you think twice about the idea.

Here are a few vids of traps and plugs taken from 16mm movies I shot aboard the USS Constellation (CVA-64) sometime during 1973, someplace in the vicinity of Yankee Station off the coast of Vietnam.

The aircraft landing are a Grumman A-6 and E-2, followed by a Douglas A-3 (waaaaay off centerline on rollout), and a Grumman EA-6B from my squadron.

Here's a quick shot of an RA-5C 'Vigilante' landing taken from the LSO platform.

Notice how the music (from Victory at Sea) seems to be synced to the action? It's not. What you're experiencing is something called a psychoacoustic effect. Your brain--basically a pattern matching gland--tries to make things make sense, fit together, and this is an example of how it can create a connection when none exists. Kinda like seeing faces in clouds or the virgin (sic) Mary in a peanut butter sandwich.

Yet another reason to pay attention to what the bumper sticker says: Don't Believe Everything You Think.

Here is a short clip taken by Ding, about the same time, of Rivit getting some dry plugs. (After a 54 day line period and 9 months deployed it was the most titillation we'd had in a long time.)

That scary close encounter at the beginning was camera zoom, not pilot oops.
No comments:
Share

• Lie in the dark and listen 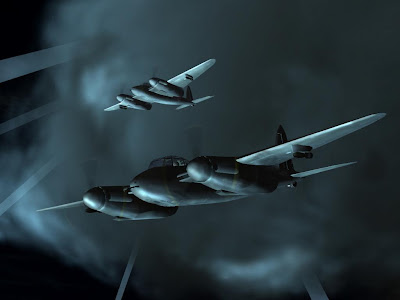